Santa Catalina’s Spanish colonial architecture recalls the original convent and school built in 1850 in Monterey, capital of the newly formed state of California.

After sharing a treacherous journey from Europe to the West Coast, Reverend Joseph Alemany, Bishop of Monterey, and Sister Marie Goemaere, a Dominican Sister, established Santa Catalina in an adobe building in downtown Monterey. Classes were taught in Castilian Spanish to the daughters of town residents and nearby Spanish landowners.

By 1854, the state capital moved to Benicia, and Mother Goemaere and her community of Sisters moved their school there as well. Santa Catalina became St. Catherine's Academy, which then educated American students whose families had moved west. Their curriculum included reading, grammar, geography, foreign languages, astronomy, arithmetic, philosophy, science, and music theory and performance. Students also learned the Old World crafts of silk embroidery and tapestry.

Almost a century later, Sister Margaret Thompson, Mother General of the Dominican Sisters of San Rafael, reestablished a Dominican school for girls in Monterey. She appointed Sister Mary Kieran as superior of the Convent of Santa Catalina and Head of School, and Santa Catalina reopened in the fall of 1950 on a Spanish colonial estate previously owned by Colonel Harold Mack.

In the spirit of those pioneering Sisters who came here in 1850, and again in 1950, in great faith and courage, we must chart our course in times that are as mysterious to us as their times were to them. We, too, are adventurers in the universe. What we have in common with them is our faith, our hope, and our love and purpose of education.
—Sister Carlotta O'Donnell 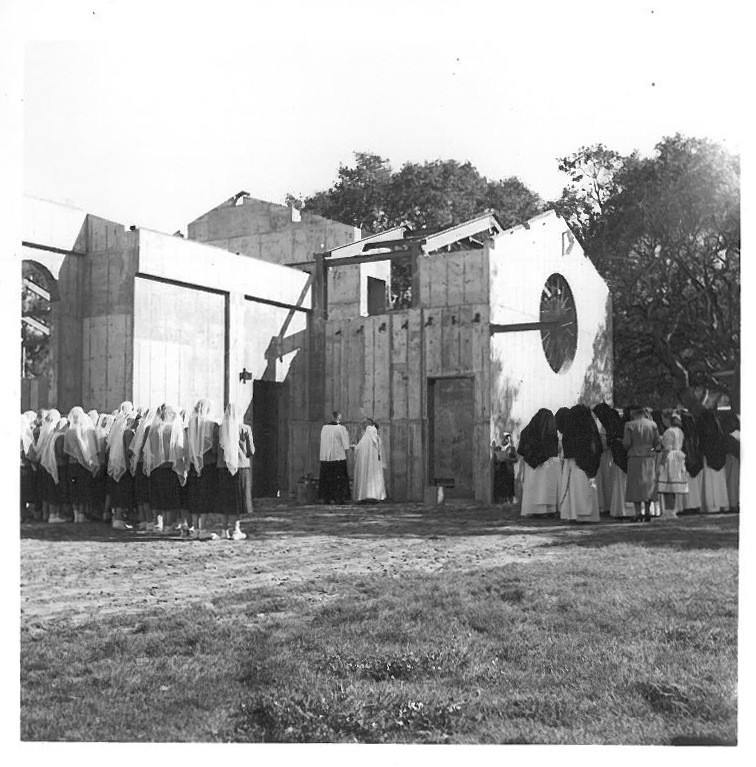 In 1965, Sister Carlotta O'Donnell began her tenure as Head of School. An early proponent of educating the whole child, she focused on guiding young women toward intellectual growth and social, physical, and spiritual well-being. Over the next 37 years, Sister Carlotta's energy, faith, and leadership kept Santa Catalina adapting to changing times while holding true to the values and standards at the core of its mission.

Upon Sister Carlotta's retirement in 2002, Sister Claire Barone became Head of School. Having served as a teacher, counselor, and administrator since 1972, Sister Claire continued the dedication to excellence in all phases of campus life, providing opportunities for growth for students, faculty, and staff, and creating a stimulating environment for learning and living.

In July 2016, Margaret "Meg" Bradley became our fourth Head of School. She is the first lay person to lead the school since its founding.