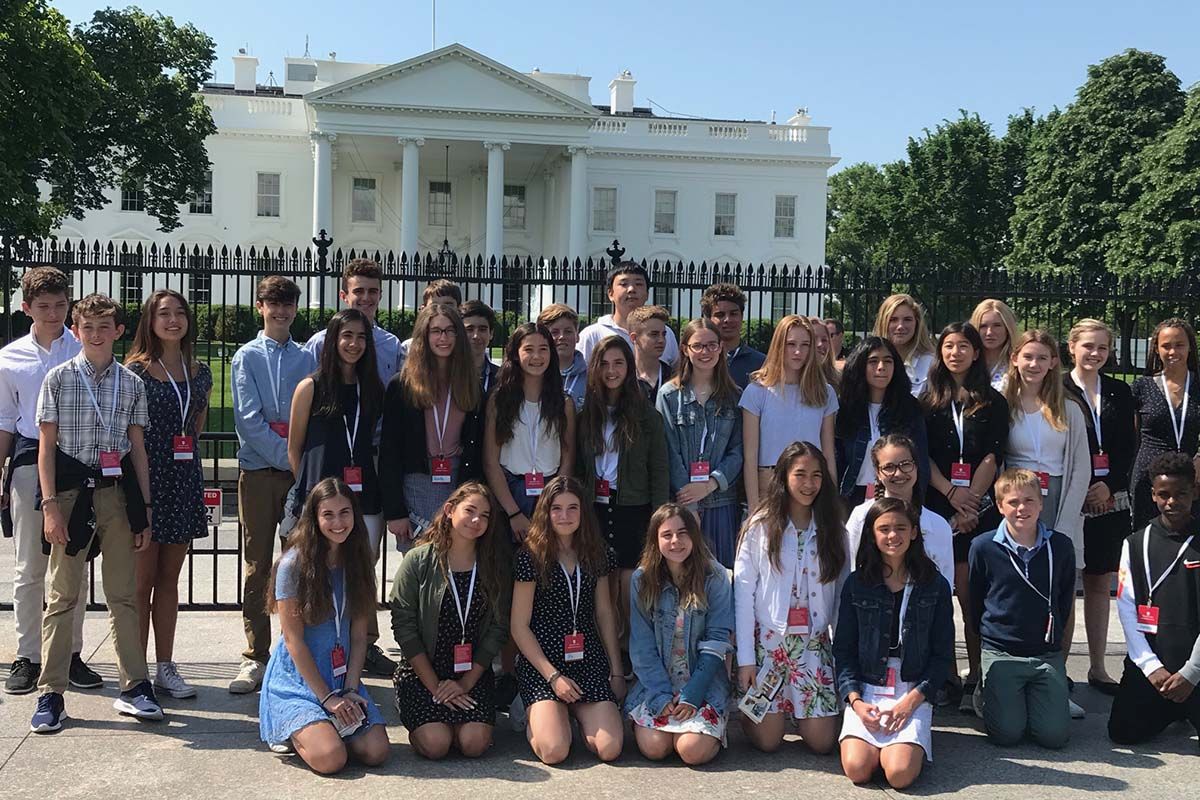 Eighth-graders went on their annual Washington, D.C., trip from April 28-May 3. Here are daily updates that Head of Lower and Middle School Christy Pollacci sent to parents.

[See photos from the trip on SmugMug.]

We all arrived safely in Washington, D.C., after a rather stressful morning. Everyone was on time and the bus beat us to school; that is a good sign. We were making good time on Highway 101 when the bus driver received an alert that the highway was completely shut down. Thank goodness for Google Maps! Our bus driver quickly got a different route to the airport.

Once we arrived the lines were long and extremely slow. We all stayed together until we got through security. We ended up with only 15 minutes before we had to board. We had three lost boarding passes and one lost suitcase. I found one boarding pass in the student's pocket. The other two passes had to be reissued and the suitcase was still waiting at TSA. All new experiences!

Once we boarded the plane we could finally catch our breath. We had dinner at San Antonio Grill, then we checked into the hotel, which is lovely. All are safely in bed—well, maybe safely in their rooms. 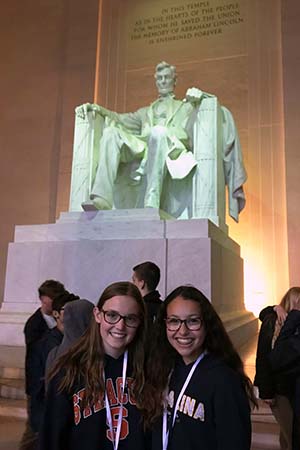 Our first stop was Arlington National Cemetery. We watched the changing of the guard and the laying of a wreath at the Tomb of the Unknown Soldier as "Taps" was played. As we looked across at the rolling green hills covered with white crosses, we were moved by the sacrifices made by others for our freedom.

We visited the Iwo Jima Memorial, Korean War Memorial, Air Force Memorial, Vietnam War Memorial, and Lincoln Memorial. Lynn, our guide, pointed out the spot where Martin Luther King Jr. stood when he gave his "I Have a Dream" speech. As we stood at the top of the marble stairs and stood where he stood, looking out on the National Mall, you couldn't help but feel a sense of awe. We have the honor of staying in the same hotel as a group of War II veterans. We are teaching the students to say "Thank you for your service" when they see them. It really puts this whole trip in perspective.

We spent time at the American History Museum, Natural History Museum, and National Portrait Gallery. We had our own private tour of the National Archives Museum, special thanks to Bill Leatherberry. It was fabulous. When we returned to the hotel we celebrated Alex Carroll's 14th birthday.

Yesterday we drove to Charlottesville to visit Thomas Jefferson's Monticello. The weather was perfect and the setting is unbelievable. Every year I learn something new. The new Hemings family exhibit is open. We had lunch at the historic Michie Tavern.

It takes between two to three hours depending on traffic to get to Monticello each way from D.C. Upon our return we had dinner and shopping at Pentagon City Mall. A good time was had by all. 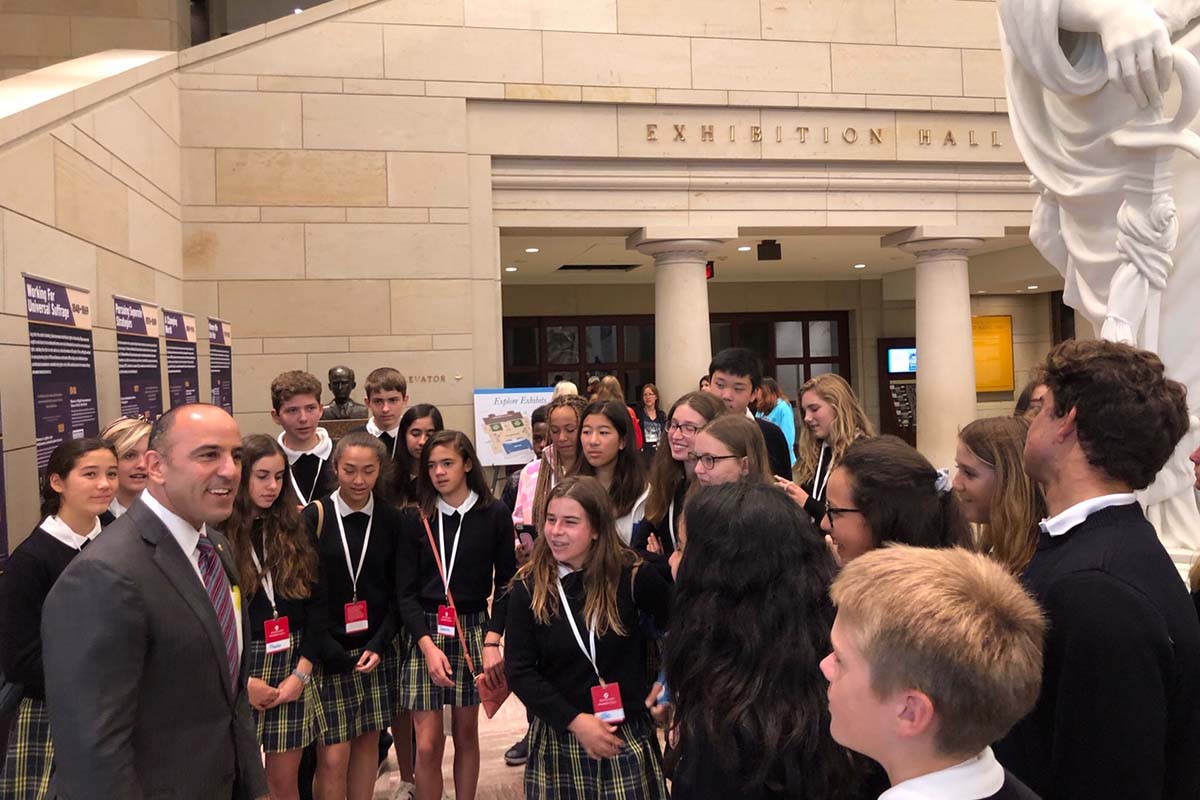 So many firsts yesterday. We began our day with our group photo in front of the Capitol, followed by our tour. No matter how many times I see it I find myself in complete awe. We walked on the same hallowed steps as Abraham Lincoln.

Congressman Jimmy Panetta met us in the Capitol. He spent a lot of time talking with our students and giving them the opportunity to ask questions. He told the students that his friends in Congress are both Democrats and Republicans and they work together. He had just come from baseball practice for the Democrats vs. Republicans game. He told us that he wears his Santa Catalina hat (we gave it to him two years ago) to all the baseball practices. Needless to say, I was delighted.

The House of Representatives was in session and for the first time we were able to watch and listen to a debate on the floor concerning a climate change bill. Nancy Pelosi presided. We also stood on the steps of the Supreme Court followed by lunch at Union Station.

In the afternoon we visited the FDR Memorial and the Holocaust Memorial Museum. We met Harry Markowicz, a Holocaust survivor. He shared with us that a family in Belgium hid him for two years. Once again, another incredible opportunity for our students. We returned to the hotel to get ready for our Spirit Moonlight Cruise. We had dinner and danced while cruising down the Potomac under the stars. 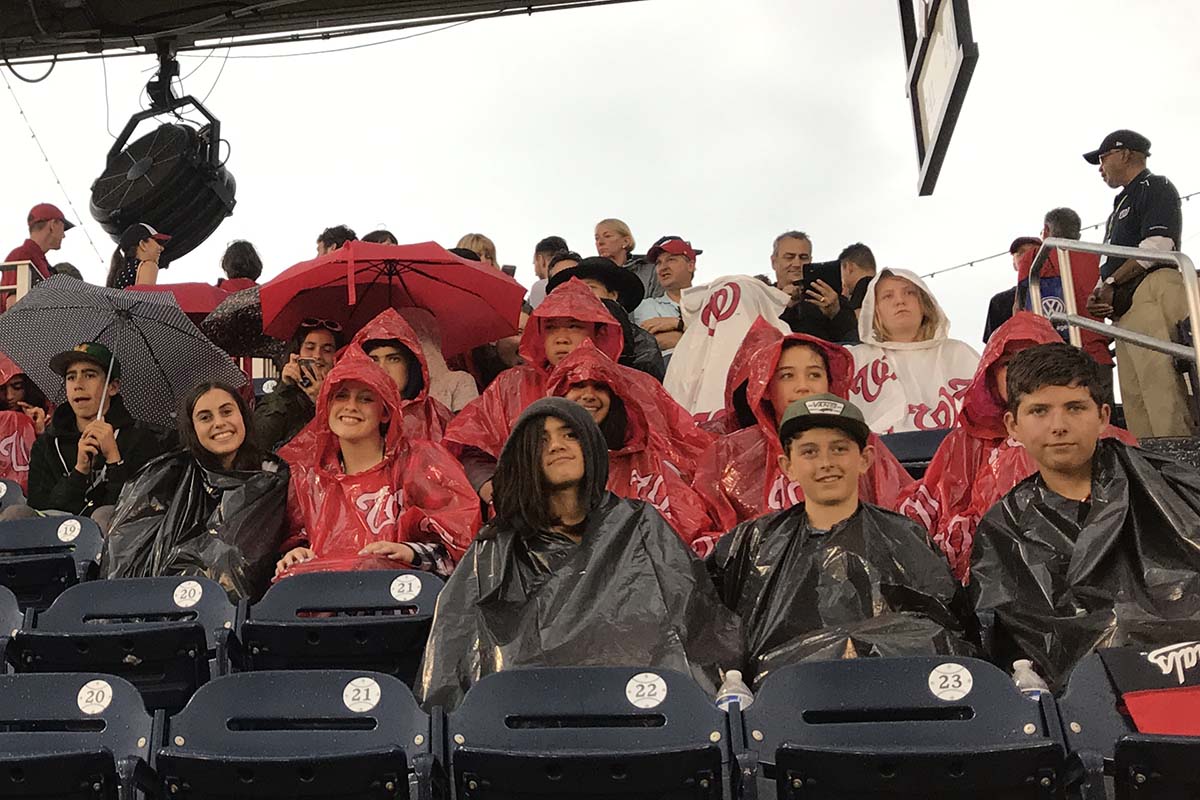 Yesterday was quite a day. We began our morning visiting the Basilica of the National Shrine of the Immaculate Conception. It is the eighth largest church in the world and is absolutely beautiful. Yesterday (May 2) was the National Day of Prayer.

Then off to the World War II Memorial, which is absolutely beautiful. The sun was out, shining on the fountains, as the students walked from state to state and from the Pacific to the Atlantic. We dined at L'Enfant Plaza Food Court and then we were off to the Newseum. The Newseum is my favorite, but unfortunately, we heard that this is our last year to visit, as it is closing. The exhibit on 9/11 is incredible, as well as the Berlin Wall.

The Washington Nationals baseball game was a first for us. We had just sat down when they announced that we needed to evacuate our seats due to a severe storm. We went down two levels under cover and away from the possibility of any lightning and waited it out. The game was delayed almost three hours. As soon as we sat in our seats again it began to rain. Some of us bought ponchos and I found a roll of garbage bags for the rest of us. We left at the fifth inning. Despite the rain, everyone had a good time.

Today we have the incredible opportunity to tour the White House for the very first time, thanks to Bill Leatherberry. We are so excited. Your children were darling as they came in this morning to check if their outfits were dressy enough for the White House. Following the White House we will go see the Jefferson Memorial, have lunch at Primo's, and then head off to Mount Vernon. Our last stop is the Air and Space Museum.

It is hard to believe that today is our last day. It has been an incredible trip, with lots of memories that will last a lifetime. Thank you for giving us the opportunity to experience this with your children.