Art history students take their knowledge on the road 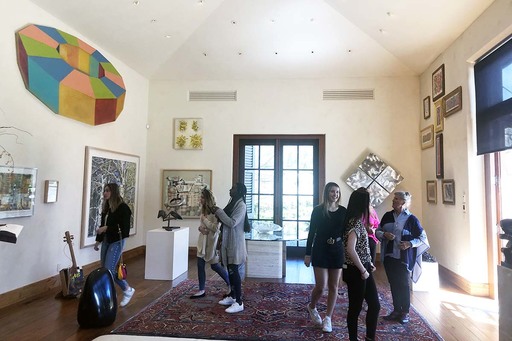 Art history students got the chance to tour private and public collections during a weekend field trip to the Bay Area, thanks to a special endowment in honor of a Santa Catalina alumna.

The Art Beyond the Campus Endowment in Memory of Martha Williams '71 was established to develop students' interest in art by funding trips to museums and galleries. Williams spent her career in art, first at museums and later as chief advisor for art acquisition at Capital Group. In retirement, she joined the board of an arts organization in Pasadena where she could share her passion for art with children.

Thirteen students embarked on their trip at the end of March. Their first stop was the Napa home of Kit Nelson Bedford '56, who has a vast, eclectic collection of paintings, textiles, glass art, and sculptures (including some that move). In addition to talking about the artwork itself, Bedford also shared how she and her husband became art collectors through travel. From there, students visited the Hess Collection and stayed overnight in a classmate's home.

The next day they enjoyed a private tour of Carolands, a restored Gilded Age mansion, where they learned about architecture and interior design. They wrapped up their trip at the Anderson Collection at Stanford University, where they saw some of the same artists they had seen at the Bedford home.

Students said that when they viewed the artwork at each stop, they got to use the language and analytical skills they've been learning in class. One student said they even surprised one of the tour guides, who thought they were a college class. Added another: "We got to see how far we've come."

Thanks to the Class of 1971 for creating an endowment that benefits students by exposing them to art in different contexts outside of the classroom.