Catalina stages North American premiere of 'The Wind in the Willows' 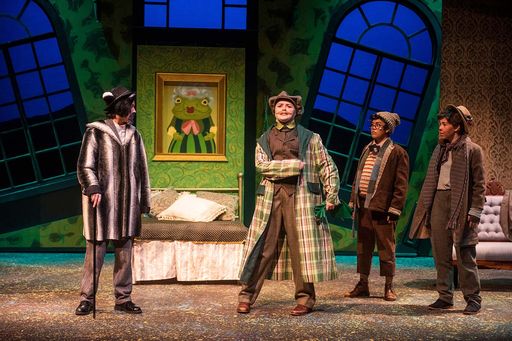 The new musical version of The Wind in the Willows had its world premiere just two years ago in England. When Santa Catalina staged its delightful production October 19-26, it marked the show's North American premiere—an honor that was more than deserved. As one local reviewer put it, "This was no 'school play' but a production of high professionalism by cast and crew worthy of a far bigger stage."

Based on an early 1900s children's book, The Wind in the Willows follows a year in the life of a group of animals in the English countryside. The story centers on Mr. Toad (Maddie Mizgorski '21), whose pursuit of the next fastest thing keeps getting him into trouble. In an effort to save Toad from himself, newly minted friends Mole (Kayla Ginette '19) and Rat (Mackenzie Roth '19) enlist the help of the reclusive Badger (Molly Gilbert '19). All the while, a gang of woodland creatures led by Chief Weasel (Bella Borgomini '21) plots to take over Mr. Toad's posh residence, Toad Hall.

Bringing the cute, the 12 Lower School students who played hedgehogs and mice were an audience favorite. Dancers got the opportunity to shine, too, performing a variety of styles from jazz to pointe. The singing was strong throughout, from solos to short musical interludes to big cast numbers, and the layered harmonies were especially beautiful. Much credit goes to the crew as well, whose colorful sets and lighting added to the exaggerated nature of the story. The cast also got to tool around stage in a variety of wheeled vehicles, from a boat and barge to a car and horse-drawn carriage.

This production was dedicated to the late Barney Hulse, a beloved member of the Santa Catalina family for over 35 years who served as music director for countless performances. A special note in the program read, "Barney had a tremendous knack for making us all sound our best. His vivacious and loving presence was felt in the way he championed for the underdog, supported the strongest, and buoyed the weakest. Barney helped raise all our voices."

See photos from The Wind in the Willows on SmugMug.