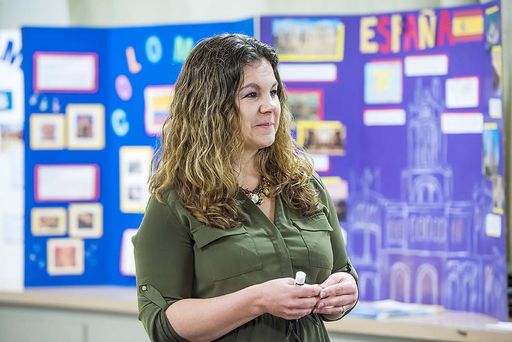 World Languages Department Chair and Spanish teacher Melissa Sheets recently attended a one-day workshop led by renowned language presenter Diego Ojeda. The workshop, conducted in Spanish, gave her a chance to keep up with her own language skills—and, of course, gave her plenty of ideas to take back to the classroom.

What was this workshop about?

The main focus was comprehensible input. That's how you teach at any level staying in the target language. For instance, with a Level 1 class, which can be hard to teach all in Spanish, you can put up a calendar and talk about the days in Spanish, and students are going to see what you're talking about so they can understand. They're hearing all those words without you having to say, "Well, here's how you say Tuesday." They're just naturally hearing it the way that we all learn as kids.

We talked about being interactive in the classroom and learned a lot of quick, brain break activities. I've tried a couple of little things already, like coming up with new ways to incorporate more music, so I definitely had some instant ideas to bring back.

We also talked about the importance of teaching about culture to create meaning, not just for fun. We are important advocates for teaching about not just tolerance, but acceptance and appreciation of people from different cultures and backgrounds.

Why did you want to sign up for this workshop?

The focus on proficiency. At Catalina, we're always working on getting the students to be better at everything. I think our department over the years has moved to this proficiency approach, rather than just drilling verb conjugations, for example.

Proficiency is more about communication for the real world: being able to read an article and tell somebody about it, being able to have a conversation with another person, listen to what they're saying, being able to read something in the target language—just building their skills and their confidence, too.

I'm big on getting students to speak because I think they have to overcome their fear of speaking, and this is a good, safe place to do that.

What have you been doing in your classroom?

Spanish 1 created presentations about a vacation in a Spanish-speaking country, but they had to choose something specific in that country to focus on.

AP did a "conversation class," where each student led a class on a different topic. For instance, one student did a presentation on the lack of diversity in Hollywood. Students need to have an article, a video, and then lead a discussion after their presentation. It usually takes the whole class period.

Spanish 4 read Pablo Neruda poems. We did Ode to a Dead Millionaire and Poem 20, which is about lost love, and then we switched to Ode to the Artichoke and Ode to My Socks. The students then wrote their own odes. I wanted to show them that it could be serious or it could be lighter if they want. They created videos where they read their ode, but dramatized it. They're kind of a boisterous class, so I've had to get creative. 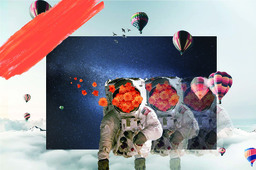 Thinking Out Loud is at the Cherry Center gallery in Carmel through March 22. 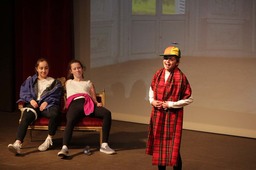 Sophomores collaborate across English classes to put on the performance for the whole school.