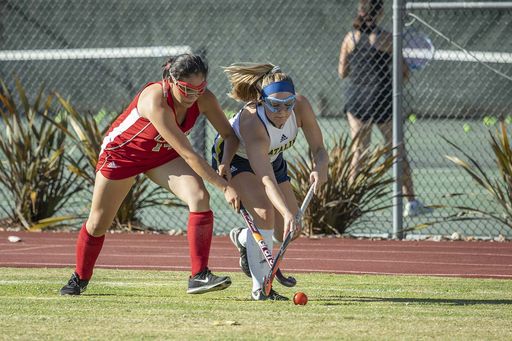 Claiming their first league title, field hockey may be the story of the fall sports season.

Competing in the Mission division of the new Pacific Coast Athletic League (PCAL), the Cougars finished the year with an overall record of 10-3-1—a huge improvement over last year's three-win season. Further illustrating how far they've come, the team played a JV schedule just four years ago, when the seniors were freshmen.

Issy Brooker '20 and Laurel Wong '19 were the team's top scorers this year. On October 26, the Cougars played for an automatic spot in the Central Coast Section championships, but came up short against North Salinas.

For insight on how the Cougars approached the season, read an interview with the team captains, written by Athletics STAR Intern Amelia Downs '19.

Water polo, playing in the PCAL Mission division, continues to be one of Catalina's strongest teams. The Cougars bested Stevenson in the first round of the league championships, but fell to rival Gilroy in a close 11-12 finals match.

For a closer look at the water polo team, read a profile by Athletics STAR Intern Emily Radner '19.

Competing in the Gabilan division, the Cougars finished with an overall record of 7-5. Across the season, Grace was a three-time medalist, while Emma Leamey '19 earned that distinction twice, sharing it once with Alex Nickle '21 and Nicole Munoz '22.

Competing in the Gabilan division, tennis finished the season with an overall record of 7-8. Annabel Stork '19 will compete in the CCS Individual Singles Championships on November 13 in Los Gatos.

Cross country placed as high as third in their center meets this season, and four athletes ran in the PCAL championships: Ana Leissner '21 and Kacey Konya '19, who set personal records in the 5,000 meters, as well as Mia Bennett '19 and Lauren Dunlap '22. The team competed in the Santa Lucia division.

With the loss of several key seniors from last year, the volleyball team was in reset mode in the Gabilan division. Though finishing with an overall record of 5-11, they never lost their drive, grabbing back-to-back wins late in the season.

Overall, 115 students (55 percent of the student body) participated in a fall sport, competing in 121 events.

See photos of all teams on SmugMug.