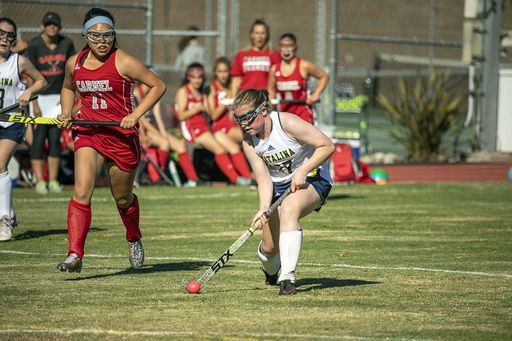 UPDATE: Through muddy turf, tough adversaries, and potentially season-ending injuries, the field hockey team has played through it all. After a 3-0 loss to North Salinas in the championship playoff game for CCS on October 26, the Cougars ended their season with good cheer, a positive outlook for next year's team, and the title of history-makers. For the first time since 1993 and for the first time in the Mission division of the Pacific Coast Athletic League, our field hockey team was crowned league champions. From participating only in junior varsity games during the 2015-16 season to becoming league champions in the 2018-19 season, the field hockey team improves vast amounts every year and is hopeful to maintain their championship title next season.

I talked to the captains earlier this season about the team's strengths, goals, and spirit.

What would you say are some of the strengths of the team this year?

Emma Bucholtz '19: This year we've been working on becoming a better and more cohesive team. Our passing skills have improved, which makes it easier for us to move up and down the field, and we've become better at utilizing our formations and all players on the field. All our players are hardworking, and the new players especially have lots of determination and drive, which is essential for field hockey. Even though they're still learning, they don't get discouraged during games or practices and continue pressuring their opponents. With this attitude, I know they'll improve a lot this season.

Laurel Wong '19: Our communication skills have improved vastly throughout the year, allowing the team as a whole to move around the field more efficiently and refine our passing. Communication is an important aspect in field hockey since we have to cover a large amount of field with so few players. The majority of our players are coming in without any experience in the sport, but they quickly learn the techniques and communication skills necessary for the team.

Lauren Dean '20: As teammates, we all have a close bond this year that allows us to play as a better team altogether, and everyone has an equal desire to do well on the field. We are a close-knit, hardworking team.

What does the team hope to improve on this year?

Emma: The whole team is dedicated to improving our skills and learning new strategies as we face the better teams in our division. We've already shown that we have a lot of potential, and we've done amazing at reaching new heights. We beat Carmel High School 2-0 this year, while last year we didn't accomplish anything like that. If anything, we should gain more confidence in ourselves!

Laurel: Confidence is an important aspect of the game. There are a few players that aren't as confident on the field, especially with communication, which again is key. Hesitation is something that can impede our developmental skills in practice and in games. Overall, I think our winning streak has really sparked some inspiration in our team to work harder, since we have a solid chance as contenders for the league championship.

Lauren: We are determined and eager to go against the better schools in our division because we recognize our potential and our improvements throughout the season, and we want to put our skills to the test.

As the season progresses, do you feel more bonded as a team?

Emma: Of course. We aren't a very large team, only 15 players, so everyone has become really close. Because we're such a small team, everyone has to do their part on and off the field. We know when to be serious and focused, but also when to joke around with each other. This helps us be a better team overall.

Laurel: Yessss! I love our team. When you're out there five days a week for 11 weeks, bonding is inevitable regardless of grade or skill level.

Lauren: We get along well as a team and use that on the field, and we never put each other down.

Are you more excited when you have home games or away games?

Emma: Home games are more nerve-wracking for me since we play in front of friends and classmates, but it encourages us to do well, and we often play harder on our home field. Some of our best games have been when there have been fans rooting us on.

Laurel: Away games are nice because it's fun to play on artificial fields like at Carmel or Salinas. On the other hand, home games are an advantage to us since the other teams are not as used to grass fields like we are. Crowds are always a hoot and a half, though.

Lauren: I like away games because when you aren't at home you have something to prove to the other teams, and it always makes me nervous and gets my adrenaline going. I love having a good crowd as well, since it makes the games more fun and exciting. At away games, there's always a large crowd watching, and that makes the games feel extra important.

Do you have any fun pre- or post-game traditions?

Emma: Before each game we say a chant to get rallied up. After the games we stretch together, discuss the game, and figure out what we can improve on.

Laurel: Our chant is long and wordy, but pretty unique. It pumps everyone up!