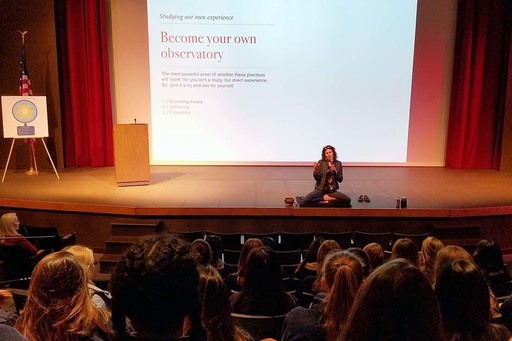 It's early December. Papers are due, finals are around the corner, and we're in the height of college application season. It's fair to say that stress is in the air.

Enter Santa Catalina's health and wellness initiative, which brought Brie Mathers to campus on December 4 to walk students through the ways they can use mindfulness to calm their brains and help keep their stress at bay. Mathers is a speaker best known for her talks called "Love the Skin You're In," which have reached nearly 100,000 girls with messages of body positivity and resiliency. As an extension of these presentations, she teaches body agency and yoga and mindfulness workshops. For her presentation in the Performing Arts Center, she presented "A Mindful Girl's Guide to Embodied Living."

Mathers opened up her talk by having everyone clench their fists for 30 seconds and then observe the way their hands stayed curled up even after they let go. That "pattern of contraction" is what our bodies go through when we hold on to certain tendencies for too long, she said. Mindfulness is a way to slowly unravel the mental and emotional knots we get into by rewiring our brains into more positive directions.

"We are always training pathways in the brain every time we think a thought," she said. "We often miss the thought that gives birth to the feeling." For example, if you think you won't pass an exam, that translates into a feeling of anxiety. "So you'll have an activating event, and then you'll have a thought about the situation, and then the feeling is the consequence. What the mindfulness practice does really powerfully is start to disrupt our narratives—and often, the narratives that we're holding aren't actually true."

She led students through two exercises. In the first, students centered themselves. They closed their eyes and focused on noticing the sensations of the body, allowing thoughts to come and go, and expanding their awareness outward to the auditorium and beyond. The second exercise, called a loving-kindness practice, was about compassion: Students thought to themselves, "May I be happy; may I be peaceful; may I be free," then repeated that mantra for someone they care about and someone they have been struggling with.

One student described the exercises as "surreal" and said she had a heightened sense of awareness but also felt relaxed. Another student said she was able to connect her heart with her mind, which she said was unusual for her. A third student called the exercises "comforting."

Mathers cited research that showed, among other things, that mindfulness training decreases the volume of the region of the brain involved in fear processing (making mindfulness great for anxiety), that it increases positive emotions and feelings of well-being, and that it lessens stress. But in the end, the best way to explore mindfulness is to "become your own observatory," she said. "The most powerful proof of whether these practices are going to work is not a study, but direct experience."