Robotics season comes to a close 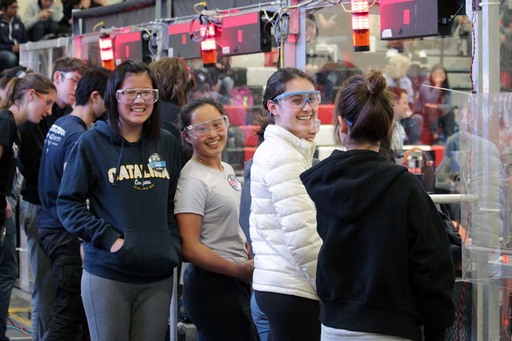 Santa Catalina's robotics team, Nuns-N-Bolts, competed at two events this year, including one close to home.

Their first matches were at the Monterey Bay Regional, held at Seaside High School from March 21-24. Their next contest was the Silicon Valley Regional, held March 28-31 at San Jose State University.

The premise of this year's FIRST Robotics Competition, "Destination: Deep Space," is that two alliances use robots to collect as many samples as they can from a distant planet before a sandstorm arrives. In the arena, robots needed to place balls in baskets, attach gears to hooks, and return to their starting blocks before time expired.

Each alliance is made up of three teams, so Nuns-N-Bolts worked with a lot of different students to devise strategies and troubleshoot technical difficulties. Their alliances won four rounds at each event.

Although they wouldn't be able to start building their robot until January, the team began preparing for the season in the fall by learning how to code and honing skills such as woodworking and soldering.

View photos from throughout the year on SmugMug.

You can also watch videos from competition rounds on their FIRST Robotics team page.