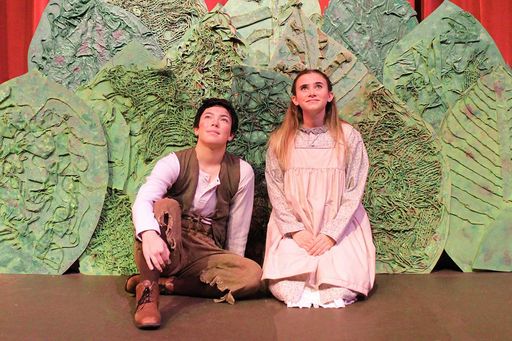 Santa Catalina School's winter play, Peter and the Starcatcher, tells the story of the boy who would become Peter Pan. But there's also the story of the girl who would play that boy—Emily Hayes, an athlete who auditioned for her first production in her senior year, and was cast in the lead role.

"I decided to audition for the show the moment Mrs. Devlin announced it," Emily says. "I've been a 'theater nerd,' so to speak, since middle school, so I was already a fan of the show and really wanted to be a part of it. Plus, a lot of my friends had been encouraging me to audition for a show for a very long time."

Emily is not a complete stranger to the stage. She participated in the annual Shakespeare Festival, in which sophomores put on one of the Bard's plays as part of their English class, and performed twice at the B. R.E.A.L. show as a member of B.U.R.R.I.T.O., Catalina's improv troupe. "But being in a show is a completely different experience," she says.

"I can honestly say that every day I try and learn something new. My biggest challenge has definitely been the transition from being an athlete who plays sports year-round to being the lead in a Catalina production. It took some adjusting, but I am very glad that I challenged myself and tried something new! What surprised me was how close the cast got. I didn't realize that we'd all become a tight-knit group of girls who support each other all the time in and out of rehearsal."

In Peter and the Starcatcher, opening January 18, an orphan (Emily) and his mates (MK Barlow '21 and Mackenzie Roth '19) are shipped off from Victorian England to a distant island ruled by the evil King Zarboff. They know nothing of the mysterious trunk in the captain's cabin, which contains a precious, otherworldly cargo. At sea, the boys are discovered by a precocious girl named Molly (Samantha Scattini '21), a Starcatcher-in-training who realizes that the trunk's precious cargo is starstuff, a celestial substance so powerful that it must never fall into the wrong hands. When the ship is taken over by pirates—led by the fearsome Black Stache (Molly Gilbert '19), a villain determined to claim the trunk and its treasure for his own—the journey quickly becomes a thrilling adventure.

"This show is unlike any that I've seen at Catalina," Emily says. "It has a few songs despite being a play; it is extremely funny, yet moving at the same time. It cleverly tells the backstory of Peter Pan and gives it a fresh look. It really is a great show that will definitely make you laugh and maybe even cry a little."

Peter and the Starcatcher runs January 18-26. Get your tickets today.

Photo: Emily Hayes '19 as Boy and Samantha Scattini '21 as Molly.