Spring musical 'We Will Rock You' was very rock and roll 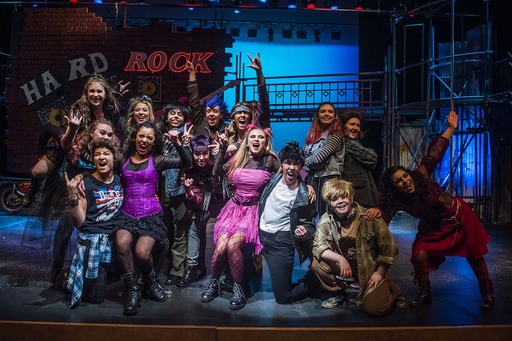 Santa Catalina's spring musical, We Will Rock You, was very rock and roll. You'd expect nothing less from a story about the salvation of rock music built around the songs of Queen. But from the sets to the costumes to the all-out performances, the production fully leaned in to the vibe, delivering a bold, fun, and distinctive theatre experience.

We Will Rock You takes place in the distant future, when music is forbidden and free thought is discouraged. In this world of brain-dead conformity, Galileo Figaro (Mackenzie Roth '19) is an anomaly, a young man who hears song lyrics in his head and yearns to know their significance. Trying to escape the clutches of the tyrannical ruler Killer Queen (Sofia Whitley '19) and her henchman Khashoggi (Molly Gilbert '19), Galileo meets another outcast named Scaramouche (Samantha Scattini '21), who joins him on a quest to uncover his destiny. Along the way they run into fellow revolutionaries Brit (Maddie Elkin '21) and Oz (Kayla Ginette '19), who take them to a hideout for rock-star-named bohemians in an abandoned Hard Rock Café. Together, this motley crew sets out to save rock 'n' roll and restore individuality and creative expression.


The show was a visual feast from beginning to end. The set was stark and industrial, backlit by a strong metallic color palette of primarily blue and pink. The all white- or gray-clad population of this future Earth, renamed iPlanet, was perfectly contrasted with our revolutionary heroes in their leather jackets, combat boots, and fishnet stockings. Their differences were also expressed in the choreography, whether evoking an automated world or something out of a music video. A rusty motorcycle, a stripped VW bug, and a life-size statue of Queen front man Freddie Mercury added some extra visual flourishes.

The actors clearly had a blast with the material. They belted out songs like "Somebody to Love," "I Want It All," and "Headlong" with the earnestness of lead singers who feel. Mackenzie and Molly squeezed every ounce of humor out of the use of song lyrics as dialog. Samantha nailed the no-nonsense demeanor of an independent, headstrong woman, while Maddie went full macho with Brit. Ariana Trueba '19 practically melted into the floor playing Buddy, the Hard Rock's laid-back hippie sage. And the show made great use of Sofia's commanding stage presence, including in a floor-to-ceiling video clip at the story's climax.

The show concluded with the anthems "We Will Rock You" and "We Are the Champions" and an encore of "Bohemian Rhapsody" (how could it not?). But by then, the verdict was already in: With We Will Rock You, the cast and crew rocked it.

See photos from the performance on SmugMug, and get a behind-the-scenes look of opening night on Instagram.