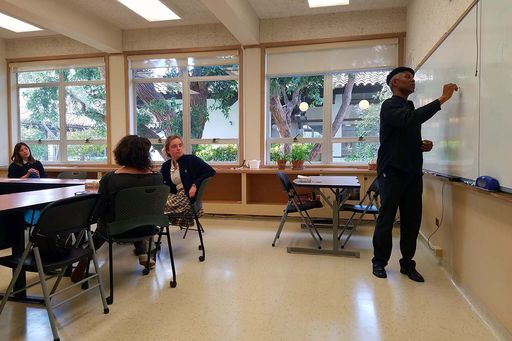 In his final session of the week, Writer-in-Residence Okey Ndibe talked about the importance of stories.

"What makes us deeply, profoundly human is our ability to tell stories," he told the creative writing class and a few assembled alumnae who were in town for their reunion.

Ndibe spent March 6­–10 telling stories to every English class at Santa Catalina. His free-flowing talks, which changed from class to class and were driven by the inspiration in the room, touched on his life and his journey as a writer. He also had the chance to meet with a few students one-on-one.

"I had a wonderful time visiting students who are really talented, attentive, and take themselves seriously as scholars," he said. "This has been one of my most pleasurable visits to any school in this country."

Ndibe is a Nigerian-American political columnist and author whose books include the novels Arrows of Rain and Foreign Gods, Inc. and the memoir Never Look An American in the Eye: Flying Turtles, Colonial Ghosts, and the Making of a Nigerian American. 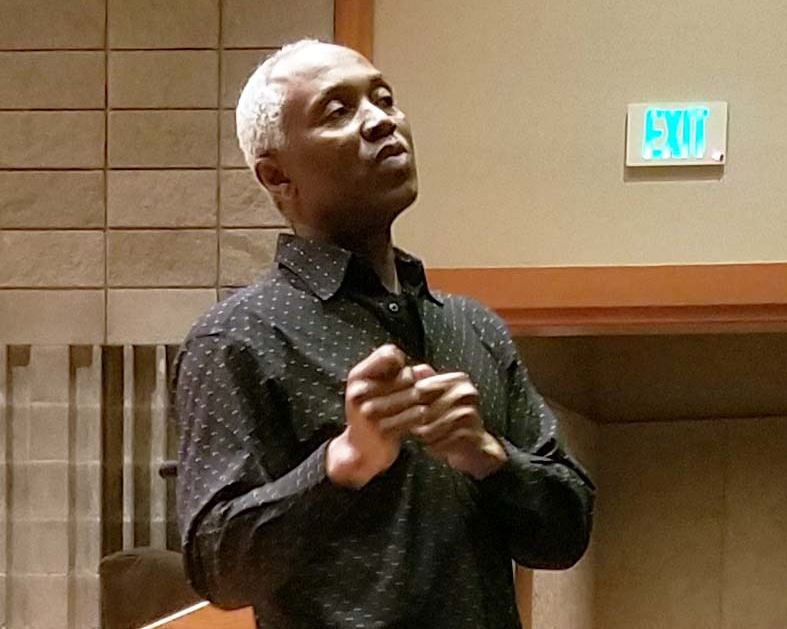 On his first day at Santa Catalina, he told students about his duty as a journalist to be a "voice for the voiceless" and to seek justice through truth. In Nigeria, that meant taking on the "contemptible elite"—government officials who dealt in corruption, padding their pockets while 70 percent of the country's residents lived on less than $1 a day.

On his last day, he spoke of a different kind of truth: the idea of palimpsest, that "there isn't one story, but a harvest of stories." As an example, he talked about the two ways he became a novelist. The first was by lying about writing a book, and then having to make good on that lie. The second was tied to a family myth about his grandfather bringing English to their village.

As the Nigerian proverb says, "All stories are true." And that's why they're so important, whether as journalism or fiction.

"The story that must be told doesn't forgive silence," Nidbe told the students.

Ndibe mostly speaks at colleges, but he relishes the times he gets to spend with high school students because, as he says, they still have their futures right in front of them.

"I like to try to engage them on the subject of the importance of the imagination, which is relevant not only to those who want to pursue careers as writers, but in any field," he said. "Just to be imaginative as a human being is the best possible state I can think of."

He captured the imaginations of more than a few Santa Catalina students.

"Incredible man," said Isabelle Redfield '17. "He offered me advice that I will always keep with me." 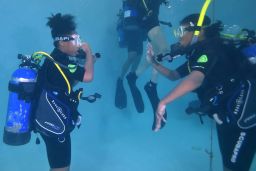 Class of 2020 returns for special celebration 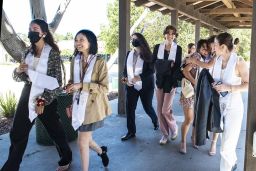 The event was a way to honor the young alumnae, who had a virtual graduation. 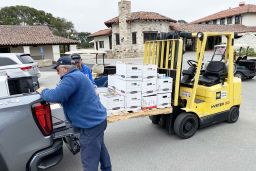 The books will become the start of a library collection for schools that currently have no reading materials. 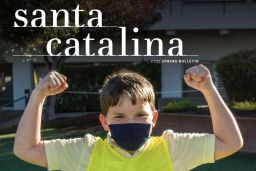 In the latest school magazine, four alumnae reflect on professional changes during a pandemic year.

Class of 2021: See where they're going to college 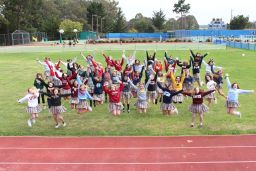 58 graduates are attending 44 colleges and universities in 20 states and 3 countries.