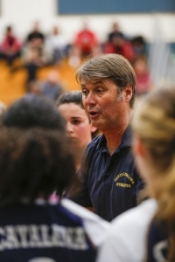 Paul Elliott was named Athletics Director, Grades 9-12, and chair of the Physical Education Department, PreK-Grade 12, in 2009. Prior to joining Santa Catalina, Coach Elliott became the winningest coach in Southern Oregon University history, amassing 383 wins as the head volleyball coach in his 16-year career. During that time, Coach Elliott was named “Coach of the Year” eight times.

Coach Elliott oversees the 12 interscholastic sports offered at Santa Catalina School, in which about 70% of the students participate each year. While the 37 league titles won since 2009 are a testament to the commitment and athletic prowess of our students, it is our nine awards as a “CIF Exemplary Sportsmanship School” in that same time that makes Coach Elliott most proud.